Rightio, morning it is. So, we went for a quick walk after breakfast to see some local cultural pieces. 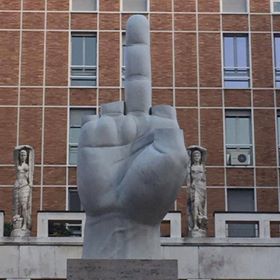 Then, grab a shower. Now, im not going to say the shower was small, you just had to get out of it if you needed room to do something like change your mind……. Anyhow, the pressure was good and the hot water was plentiful. But, everytime I tried to wash something youd hear a bang as I hit the glass. 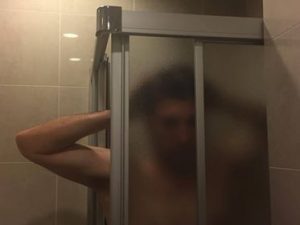 It became a running joke. Then Robin tried to do a part leg shaving part contortionist routine, the grand finale of which was dropping the razor and turning off the mixer tap with her arse when she bent over to pick it up. So, showers over and off to the tranny station

The trains in Italy (I think) are brilliant. Fast, clean, relatively cheap and hassle free. I love em. So, a short walk to Milano station and a 30 min train ride saw us at our hire car company where a short 2.5 hours later we became the proud owners for a week of a Fiat 500! I Fiat, but I dont believe it……..

The Fiat 500 wasnt actually the car of choice. But, being technophobes (I have been considering the Amish superior to me in their computer skills lately) we failed to download the offline google maps app so had no sat nav. I need a sat nav! They saved my marriage when they came out. Robin is the navigator but she gets car sick when she looks down. So, for over a decade we drove around together lost with me saying “where are we” and her saying “I dont know, I cant look down”. Anyhow, we could rent a sat nav for 13 euro a day in the Fiat Panda wed paid for or upgrade to the Fiat 500 for 25 a day with built in sat nav. So, Fiat 500 it is!

So, its time to go Top Gear on this things arse. Keyless entry, self opening boot (with a DOUBLE CLICK of the button, right, like i saw that coming), manual, right hand drive, diesel, push button start, GPS, automatic headlights, automatic wipers, power windows. Wow! Fantastic while its under warranty……… Anyhow, after a brief 30 min working out how to enter our destination into the GPS we were off! In the wrong direction. Then, in the right direction. We stopped at a stop sign to turn right and the guy behind us overtook us at the intersection. Welcome to driving in Italy!!!!!! Everything you have heard is true. Road rules are merely suggestions, taken with a grain of salt. But, we set our sights for Lake Como 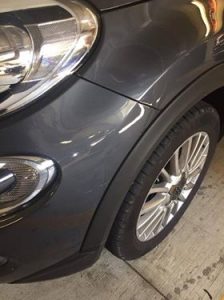 The drive to Lake Como is amazing. Mountains, tunnels, spectacular scenery, its got it all. Once you get off the toll way you hug the waters edge on narrow twisty roads through towns. 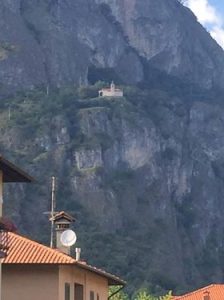 Tourists walk the non-existant verge flirting with death by Fiat. In places, the centre line on the road disappears which I think is Italian for “two cars cant pass”. So, driving isnt for the meek. At one point I overtook a car as a motorbike overtook me all on a narrow 2 lane road. Robin screamed a couple of times. Anyhow, we arrived safely at 4pm but with nerves still jangling. First stop was a pub for a schooner at 4 euro. It was hot, cramped but the beer was good. Second stop was the local mini mart for a cold 500ml Becks beer 1.50 euro which we took down to the lakes edge and thorougly enjoyed (sorry inkeeper). Behind us on the mountain is a church. The colours of the mountain look surreal. It looks like a Sound of Music backdrop. The lake itself is 200m above sea level. 150m deep on average but super deep in places where the bottom of the lake is actually below sea level. Just an awesome place.

Anyhow, back to the minimart where I bought a 6 euro bottle of Negro Amaro (one of my favourite grapes) and then wondered how to get the wine out. 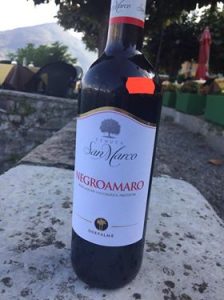 Back to the mini mart where I bought an ingenious device which easily removed the synthetic cork allowing access. Brilliant!

Early afternoon: About now , my phone went dead. So , i popped it on charge and went out. Where we are staying the road hugs the waters edge. Buildings on one side, lake on the other. BUT, the restaurants have their seated areas on wharves on the lake itself with the kitchen on the other side of the road. It creates this endless game of chicken as staff carrying plates of food and drinks try to cross a road teaming with sports cars, push bikes, motorbikes, rental cars etc all with scant regard to any road rules. I ordered a margheritta pizza for 5 euros and a beer 5 euros off a particularly fit young waitress who I suspect with her yoda like training probably would make the Australian touch footie team. Her acceleration off the mark, her step and her swerve were hypnotic to watch. 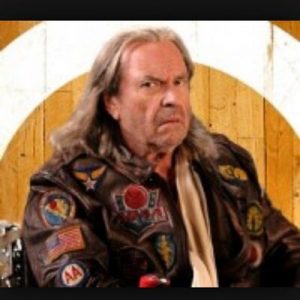 Anyhow, in this gladitorial style of restauranting the only measure of success is survival. She successfully bought me a perfectly executed pizza. Base just dotted with scorch marks, smokey but not burnt. Brilliant! Anyhow, back to the bedroom for some shut eye, or so I thought……..

About 10:30pm explosions started to rock the night. I didnt immediately react, but after a few minutes I grabbed a towel and snuck out on the verandah for a look. Fireworks! No great surprise really. Either the Italian military were training or it was fireworks. They had been going for some time, so I didnt bother going to get a camera as I knew they would soon end. But, they kept going. So, I got the camera and took a few snaps. Then, watched a bit longer. Finally, i got bored and went to bed where I could still hear the booming and the sparking. Ive had a little (very little) to do with fireworks, enough to know someone just blew up a shitload of cash. Im curious what it was all about. Will investigate on the morrow……. it was an amazing display over the lake.