The last supper and the crucifixion of christ were painted on opposing ends of the monks smoko room in Milan. The last supper was a common theme for artists, so leonardo da Vinci (not Leonardo da’capprio just to clarify) didnt invent the concept. What he did do was jazz it up a little and give the various subjects emotions, telling the story of the betrayl of Christ by Judas in their expressions. Its a big piece, as you can tell by a person in the foreground of the crucifixion. The Last Supper took 4 years to paint so the monks were over Leonardo by the time they got their lunch room back. Leonardo used the face of the monk who complained the most as his model for Judas. Cool guy

. Wouldve made a good Aussie that Leonardo. 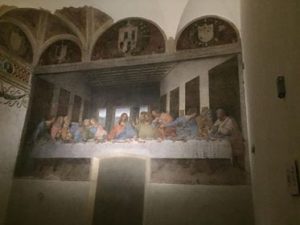 In world war 2 the Italians under Mussolini fought against Australia. As a result, England and America bombed Milano and destroyed 60 percent of the city. Much of the “historical” buildings are reproductions, re built after they were destroyed by aliied forces. Its very sad. I dont get the impression the Italians bear a grudge against us. Ive heard it described many times now as Italy being liberated by the allied troops, but still. There had to have been huge losses of both lives and property. The monks smoko room was hit by a bomb and it blew the place up, but left the two walls with the two paintings standing.  A miracle?

And, sorry da Vinci code fans. Theres 12 disciples and Christ in the painting. No ladies. John is beside Christ and looks a bit girly, but thats cause Johns just a bit of a kid. If the character beside Christ is a woman, then we are missing a disciple? What tha? So, what happened? John ducked out for a leak when they did the painting? Or maybe he was running late? Trying to find a park for his ass? All seems a bit unlikely…

We have been outside the church so its time to go inside. The local guides are invaluable, providing insights and history on things that are quite overwhelming. 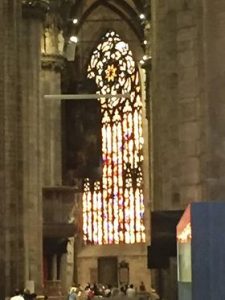 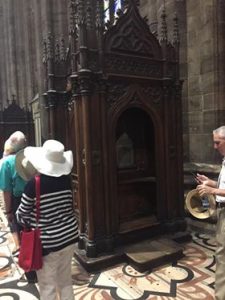 You cant really tell, but this roof is not carved. Its painted to look 3D. They cant restore it because they cant find anyone who can paint that well.

A crypt within the church. A pope? A bishop? A leader? 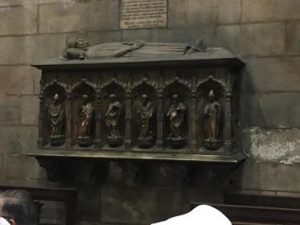 Nup. A pimp. I kid you not. This guy ran brothels and made a heap of cash. Towards the end of his life he made a huge donation to the church in an attempt to buy his way into heaven. Did it work? Dunno. But, they did bury him within the church!!!!

A Milano thing is happy hour on the grand canal (Milano had an extensive canal system but Mussolini filled them in to improve car access). Anyhow, their happy hour involves food, not booze and goes for all of dinner time. For 11 euro we got an all you can eat buffet and a drink (glass of a nice amarone). Good fun!

The Grand Canal of Milano is a buzzing, vibrant area of hip bars and restaurants. Take note NSW, the minimarts have fridges full of beer and you just duck in and buy one and walk out the door drinking it. Yet, no violence……. I popped into a shop that sells arancini balls. I bought one. They are really good. The shop is open until 4am. 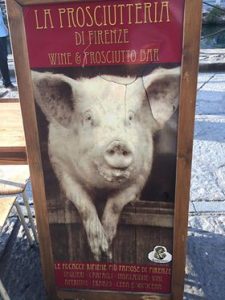 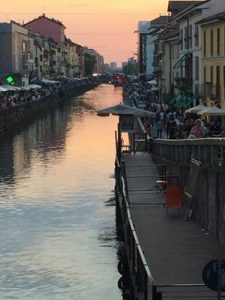 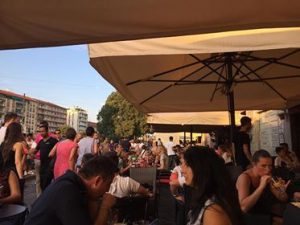 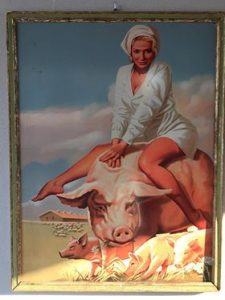 Then off to Verona! Verona became famous when little Willy Shakespeare did a Natalie Imbruglia and knocked off a story that already existed about two star crossed lovers named Romeo and Giulliet. I’ll give Willy some credit though, he did more to the story re writing it into a play than our Natalie did when she covered Torn. Anyhow, it put Verona on the map. Sadly, little Willy never actually found the time to visit Verona. 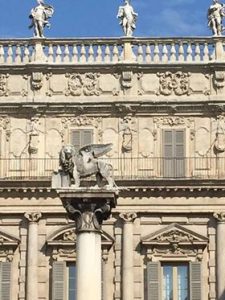 Research was done to try to suss out who Romeo and Jules actually were and the Italians think they know. This is the house Jules is believed to have lived in. I think the balcony is a new addition. Theres a statue of Jules below it. If you rub her arm its meant to bring luck and ladies if you rub her boob its meant to help you fall pregnant. Robin wouldnt go anywhere near Jules!!! 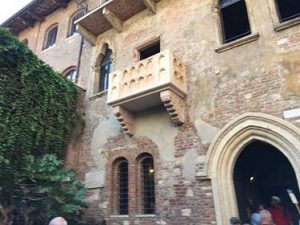 They worked out where Romeo lived too, but no one goes there…. 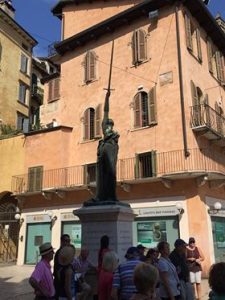 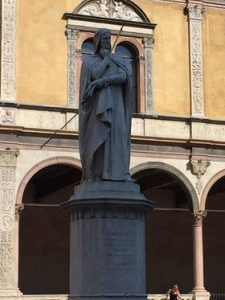 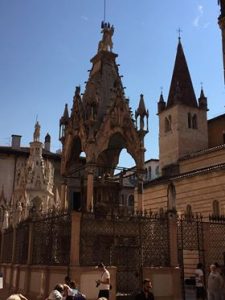 Italy has a problem. There is so much “stuff” in Italy the whole population could be involved in preservation works, but the government isnt real flush with cash. Its a very tricky problem id imagine.

Verona has an arena (not Tinas sister) like Rome does. They hold concerts there and Opera. Opera singers perform there without microphones to crowds of 10 to 15 thousand people. Its open air, so if it rains they have an intermission. Being an arena if theres a horse in the story they actually use a horse! Elephants have been banned at the Opera nights after one fell into the orchestra pit…. 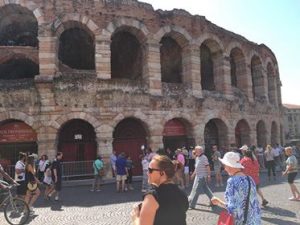 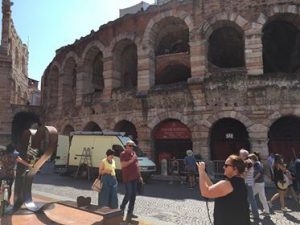 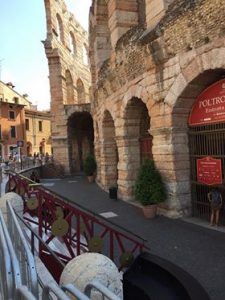 The bridges were destroyed by the allied forces in the second world war but have been re built. Such destruction. 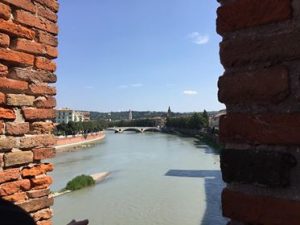 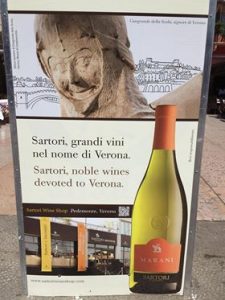 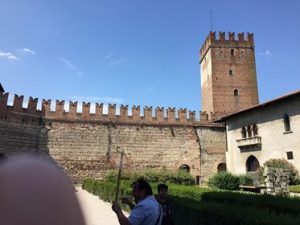 Ok, enough of Verona. Its lunchtime 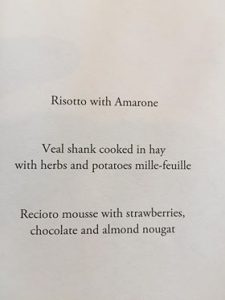 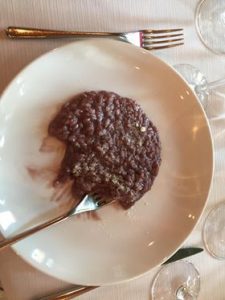 Verona is a short drive from the wineries of Valpolicella. The home of Amarone!!!!! Woo hoo!!!! Amarone means bitter, which is a pity. Amarone is not s bitter wine. Its a long story but the first Amarone was a mistake. The winemaker was trying to make a sweet red wine (a bit like a vintage port) but cocked up and made a dry red. It wasnt sweet like he wanted so he referred to it as being not sweet or bitter. But, its not bitter. Amarone is lovely.

Anyhow, a lovely lunch with matched wines preceeded a winery tour where grapes are spread out on racks to dry and sultana prior to the commencement of the winemaking. 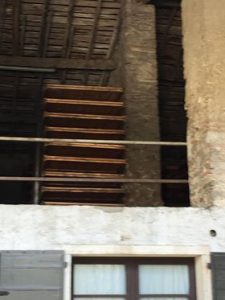 Followed by a short drive to Venice. Venice is accessable by car from the mainland via a bridge. Its a lovely drive across it. 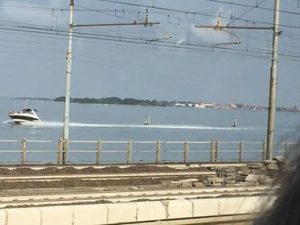 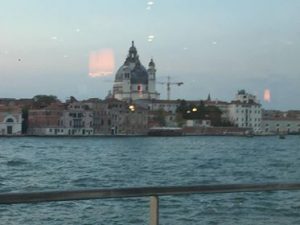 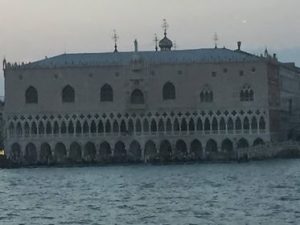 And on to the River Countess, our home for the next week. Its a Dutch boat, Dutch captain with an international crew. Many crew members are from Bulgaria and have backgrounds in studying languages. 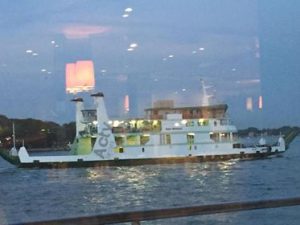