This “tardis” greeted me when we left the boat. Its a lift to our new room in Venice. Or is it?

We go to check in, only to be told we are in another building all together. Sound dodgy? Anyhow, down a street and round the corner and we end up in a big room with a huge bathroom. That night we go out for scampi with freshly made spaghetti. The waitress says we are full here, but follow me……. Same as the accomodation, down the road, round the corner and into a delightful space with an awesome guitarist/singer. We didnt want to leave, so we ended up at midnight drinking lemon cello while the staff had dinner. Friends at the table arrived in Venice that day and had the same experience as us. No, you arent in this building. Come with me. They ended up in a beautiful flat.

We still had a ticket for the museam at St Marco square, so we decided to use it. There were some amazing pieces. Ive always liked the story of Icarus 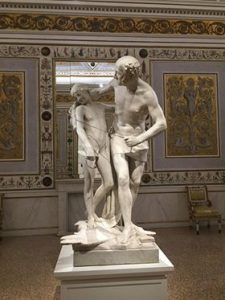 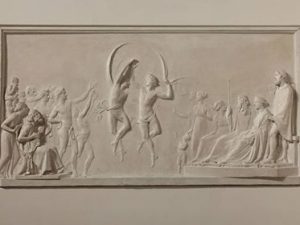 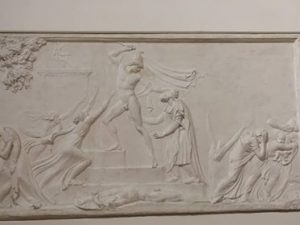 But, then some pieces started to catch my eye. I think we should have a caption competition!!!! 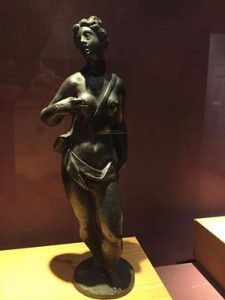 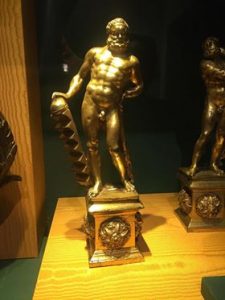 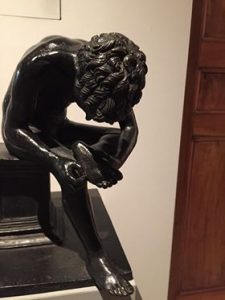 Now, I dont pretend to know whats going on in these photos. But, I can make it up I reckon

Last two for the caption comp. It just gets weirder and weirder!!!!

Finally, its time to leave Venice and its surrounds. We catch a vaporetto (back in the day they were steamboats and were named for the steam coming out of them). Its a short, chaotic, confusing ride to the train station where we jump anorher of Italys fantastic trains for a 2 hour hop to Bologna. We have been to Bologna already on this trip. The end goal is to get to Tuscany, but why rush???? Bologna is part way, so we booked a room near the train station for the night.

Bologna has kilometers of these porticos. They are great! You are undercover but outdoors. Makes getting about in any weather pleasant.

So, Bologna is the home of Mortadella. Hmmmm. In the world of cold meats im not sure where I’d rank Mortadella. Anyhow, we go into the CBD and find Simoni Salumeria. We get the Grand Platter. Mortedella, Mortadella ( thats not a joke. Its a bit like the Monty Python spam breakfasts) prosciutto, salami and cheese. Our waiter explains theres the historical Mortadella and the modern style. They are different I decide. I dont know if what we get in Aus is imported or domestic in origin, but its identical to the modern Mortadella we are served (at about $22.50 a kilo). The older style has a slight braun like patchwork quilt look and is firmer and drier like prosciutto and sliced wafer thin.

I might have screwed up. This thing is the size of a huge pizza! Armed with a local Gewurztraminer and a Valpollicella red we soldier into it. Afterwards we attempt some sight seeing but decide to hibernate and sleep off the meat. By early afternoon we both asleep.